I. Introduction to European Data Protection

a. The Universal Declaration of Human Rights

b. The European Convention on Human Rights

a. Early Attempts at a Cohesive Approach

i. Chapter Two of Convention 108 – Principles of Data Protection

4. The Need for a Harmonized European Approach

a. Directives vs. Regulations

b. The Data Protection Directive

5. The Treaty of Lisbon

f. A Timeline of Data Protection in Europe

a. The Role of the Parliament

i. The Legislative Process

b. The Functioning of the Parliament

3. Council of the European Union

a. The Role of the Council

b. The Functioning of the Council

c. Distinction from the Council of Europe

a. Role in Data Protection

b. Representation and Independence

6. Court of Justice of the European Union

a. The General Court

b. The European Court of Justice

a. Jurisdiction of the Court

b. Data Protection Decisions by the Court

a. Background of the ePrivacy Directive

a. Background of the GDPR and the LEDP Directive

b. Structure of the GDPR

d. The European Data Protection Board

e. Relationship to Other Legislation

i. References to the Data Protection Directive

c. “An Identified or Identifiable”

a. Special Categories of Personal Data

b. Prohibition on Processing and Exceptions

4. The Role of Encryption, Anonymization, and Pseudonymization

a. Pseudonymization of Data

i. Natural or Legal Person, Public Authority, Agency or Other Body

ii. Alone or Jointly with Others

iii. Determines the Purposes and Means of Data Processing

d. Distinguishing a Controller from a Processor

Section B: Territorial and Material Scope of the GDPR

2. Territorial Scope (Establishment in the E.U.)

a. How to Determine “Establishment”

b. How to Determine if “the Context of the Activities” is in the Establishment

3. Territorial Scope (Non-Establishment in the E.U.)

a. Data Subjects in the Union

i. Offering of Goods and Services

4. Material Scope of the GDPR

a. The Elements of Consent

ii. Specific to the Processing

a. What is a “Legitimate Interest”?

b. What are the Interests and Fundamental Rights of Data Subjects?

b. Prohibition and Derogations

7. Processing That Does Not Require Identification

2. When Information is Collected from the Data Subject

a. Timing of Information Provision

b. When Disclosures are Not Necessary

i. When Data Subject Already Has the Information

iii. Obtaining or Disclosing is Laid Down by Law

iv. Confidentiality by Virtue of a Secrecy Obligation

4. Disclosure Requirements Under the ePrivacy Directive

4. Right to Erasure (“Right to be Forgotten”)

7. Right to Object to Processing

8. Right to Not Be Subject to Automated Decision-Making and Profiling

a. The CIA Triad

b. Security Controls and Protection Mechanisms

i. Purpose of Controls: Preventative, Detective, and Corrective

i. Developing a Plan

a. What is a “Personal Data Breach”

i. When is Notification Required?

ii. What Must be Included in a Notice to a DPA?

i. When is Notification Required?

ii. What Must be Included in a Notice to Data Subjects?

a. Choosing a Third-Party Data Vendor

5. Cybersecurity and the NIS Directive

a. CSIRTs and NIS Cooperation Group

b. Operators of Essential Services and Digital Service Providers

1. Introduction to the Accountability Principle

b. Accountability Under the GDPR

2. Responsibilities of Controllers and Processors

3. Data Protection by Design and by Default

a. The Seven Principles of PbD

b. Data Protection by Design and Default Under the GDPR

4. Documentation and Cooperation with Regulators

a. Records of Processing Activities

b. Article 31 – Cooperation with DPAs

i. When is a DPIA Required?

ii. What Must Be Included in a DPIA?

a. When is Appointment of a DPO Required?

b. The Role of a DPO

a. Types of Audits

b. The Audit Life Cycle

a. The Risks of International Data Transfers

b. The Surprise Minimization Rule

c. The Framework for Data Transfers to Third Countries Under the GDPR

d. What Constitutes a “Transfer”?

a. The Making of an Adequacy Decision

b. Adequacy Decisions and the United States

a. Schrems II and the Use of SCCs

5. Codes of Conduct and Certifications

a. Codes of Conduct

2. National Supervisory Authorities and Their Powers

d. Prior Consultation Under Article 34(4)

3. The European Data Protection Board

a. Structure of the EDPB

b. Tasks of the EDPB

a. Independence and Secrecy

b. Tasks and Powers

5. Self-Regulation Under the GDPR

c. Factors to Consider in Establishing a Fine

e. What Constitutes an Undertaking for Article 83?

III. Compliance with the GDPR

a. Legal Basis for Processing

i. Consent of the Employee

iii. Necessary to Comply with a Legal Obligation

b. Special Categories of Employee Data

b. Monitoring the Workplace

7. Bring Your Own Device (“BYOD”) Programs

a. Lawfulness of Processing

b. The Household Use Exception

a. WP29 Guidance on What Constitutes Direct Marketing

b. Digital vs. Non-Digital Direct Marketing

c. Direct Marketing Under the GDPR

i. Direct Marketing as a Legitimate Interest

ii. The Right to Opt-Out

a. Person-to-Person vs. Automated Calls

4. Other Types of Direct Marketing

a. Tracking Consumers Across the Internet

ii. Examples of Other Methods

b. Parties Involved in Behavioral Advertising

i. Application of the GDPR

ii. Application of the ePrivacy Directive

i. Who is the Data Controller?

a. Controllers and Processors in Cloud Computing

iii. Who is the Controller?

v. Recent Changes to the Browser

b. IP Addresses and the Internet “Phonebook”

a. Who is the Data Controller?

b. Types of Data Used to Target

i. Data Subjects and Personal Data

v. Personal Data of Others

a. Internet of Things (IoT)

b. Machine Learning and Big Data

Council of the Europe Union

The Council is led by a President, a position that rotates among member states every six months on an equal basis.3 The role of the President is to preside over meetings of the Council, set its agenda, and represent the Council in its relationship with the European Commission and Parliament.4

a. The Role of the Council

Under the modern E.U. framework, the Council plays a legislative, political, and budgetary role—similar to the European Parliament. Article 16(1) of the Treaty on European Union, as amended, provides: “The Council shall, jointly with the European Parliament, exercise legislative and budgetary functions. It shall carry out policy-making and coordinating functions as laid down in the Treaties” governing the E.U.5

When the Council meets to deliberate and vote on draft legislation, it must conduct such meetings in public.6 The text of the Treaty on European Union is silent on whether the Council’s meetings must be open to the public when it meets for purposes other than exercising its legislative functions. Presumably, therefore, such meetings can be held in private.

b. The Functioning of the Council

Acts by the Council can include both regulations and directives. Additionally, however, the acts of the Council can take the form of decisions, common actions, common positions, recommendations, opinions, conclusions, declarations, or resolutions. The treaties establish whether a simple majority, qualified majority, or unanimous consent are necessary to take any of these listed actions.

The Council is intended to function as a unified entity. When the Council meets, however, it does not necessarily meet as a collective group. Rather, the Treaty on European Union calls for the Council to “meet in different configurations.”7 There are currently ten different configurations, which include: (1) Agriculture and Fisheries; (2) Competitiveness; (3) Economic and Financial Affairs; (4) Education, Youth, Culture, and Sport; (5) Employment, Social Policy, Health and Consumer Affairs; (6) Environment; (7) Foreign Affairs; (8) General Affairs; (9) Justice and Home Affairs; and (10) Transport, Telecommunications and Energy.8

c. Distinction from the Council of Europe

Explanatory Note: Another distinction to be aware of is that between the E.U. and the European Economic Area (“EEA”). The EEA consists of all E.U. member states, along with non-member states of Iceland, Lichtenstein, and Norway. The EEA is based on a 1994 agreement, which allows these non-member states to participate fully in the E.U.’s internal market. Switzerland is not a member of the EEA, but it has a set of bilateral agreements with the E.U. that also permits it to take part in Europe’s internal market. 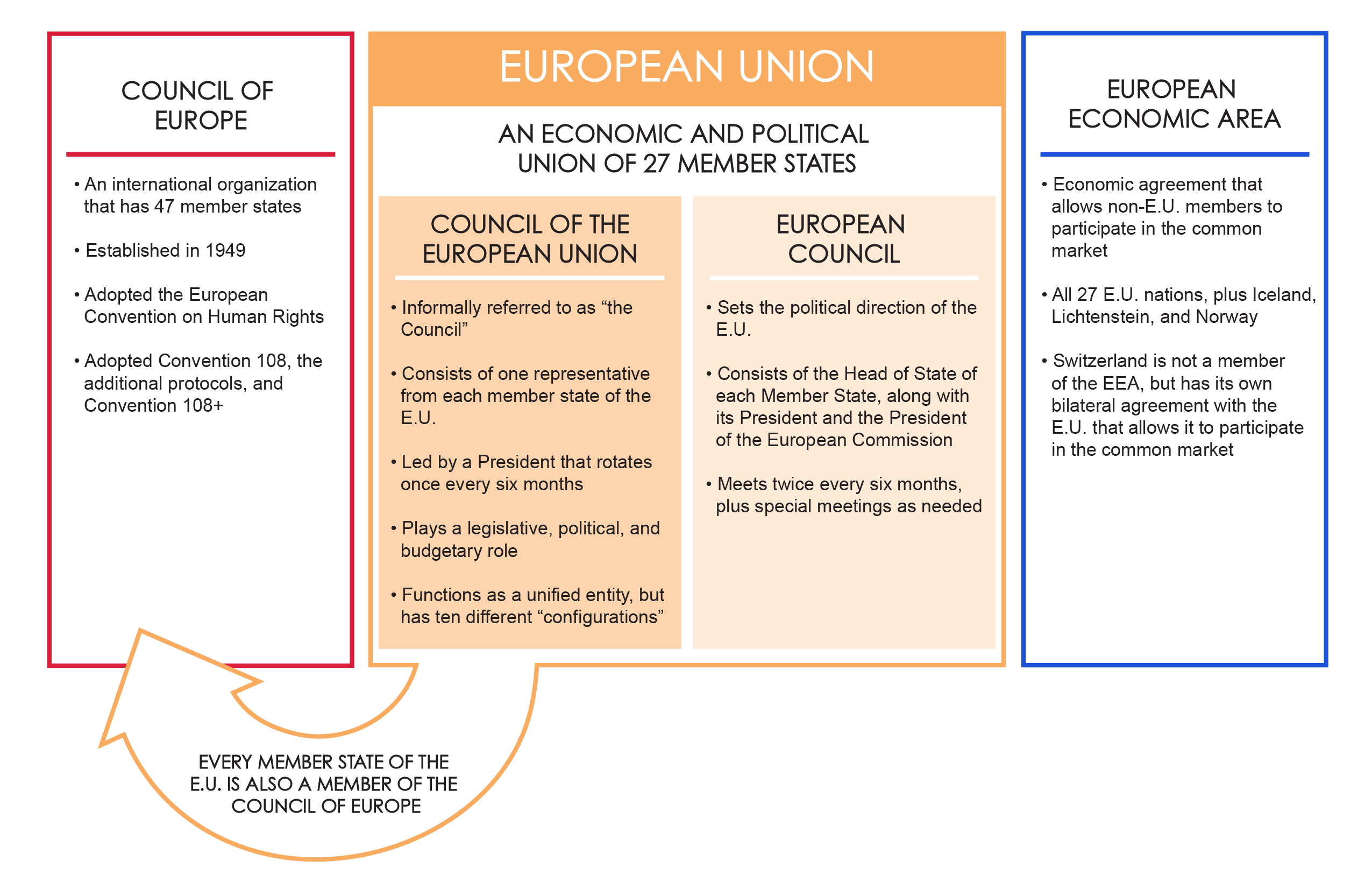